Using An (Awesome) One Man Band 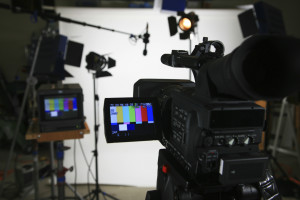 Where’s all the crew!?

No matter the type of shoot–whether it’s for a broadcaster or a corporation, some companies with less complicated shoots keep their budget down by hiring a one man band: a single person who handles capturing a great image and clear audio, manages lighting set-up and break down, and does media management. Sometimes, he or she may even handle asking questions of the subject during filming.

At Atlantic we’re always happy to accommodate any size budget, and sometimes that means supplying a one man band outside of our primary shoots with full size crews. And while the results are top notch with a one man band, we always preface the hiring of such an awesome production guru with some warnings.

On a set, anything can happen while you have just one person focusing on pulling the whole thing off. If the operator is sitting across the subject during an interview and not focusing on the camera, how will that operator know the subject moved slightly within the frame and is now out of focus? This may not be caught by the operator until twenty minutes have passed, and then you have twenty minutes of soft footage. The same goes for audio: what happens if your subject raises his or her voice rapidly and randomly–who is mixing that audio and riding the gain? What if the lavaliere mic is scratching on a silk tie; was it heard?  What if you’re focusing so much on the interview you realize your camera’s battery dies and it hasn’t been recording for over an hour?

One man bands are great and cost-effective if everything goes 100% correctly. But if just one little thing doesn’t go right, then the entire weight of the shoot falls on one person. Some crew don’t mind the pressure while others prefer not to take the risk. Atlantic will always provide whatever you need to get the footage you want, just so long as everyone involved understands the many, many things that could go wrong.