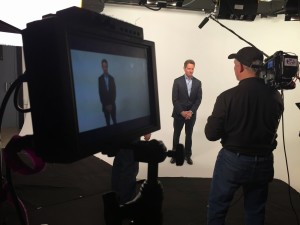 So, we used a sandbag as a stand-in for the former Secretary of the Treasury, Tim Geithner.

An Atlantic team consisting of a camera operator, sound recordist, and one crafty coordinator shot a piece-to-camera with Geithner introducing a video challenge that will be presented to business students across the US, using the Sony F800.

He stood within a white cyclotron for full effect, but in order to get the positioning just right we used a nearby sandbag to make sure he could walk right onto the set and jump into his monologue.

But it all came together, finally. The final video turned out great, but that sandbag? He was the real star. Eventually that sandbag will retire and become an occasional correspondent for CNN and then write memoirs about that fateful day where it all began. And then his rise through the ranks commence, which leads then to his inevitable fall from grace.

I’m sure he will even mention what he did in-between his moments in the tungsten light: weighing down a c-stand so it wouldn’t tip over. And being thrown on the floor occasionally, too.

Hey–everyone has to pay their dues. It’s not everyday we get to work with a former US Treasury Secretary.