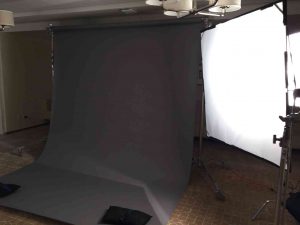 were on set recently and used a seamless, or as it’s sometimes called in the UK a “colorama.” This normally isn’t a big deal; tons of productions we run and that others run use seamlesses all the time. What makes this one different?

Nothing especially. But we just felt the picture of the seamless represented just how smoothly the whole day went. Look at that thing! There’s not one crease or aberration on it. Granted, this was before we interviewed 4 standing subjects in front of it, but still.

And for the production-inclined, the seamless was rigged with two basic c-stands with cardellini clamps as heads, and a 10-foot speed rail held in place with said clamps. The rail was run through the seamless and then situated between the c-stands.