Helicopters & Drones – What You Need To Know

Aerial videography is something we’re seeing a lot more of these days. We’ve had our fair share of experiences up in the air, so we thought it might be helpful to shed some light on some of the finer details of taking to the skies. 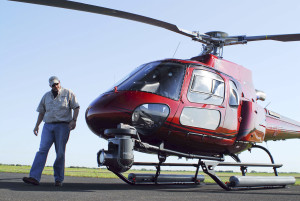 A CineFlex camera mounted to the bottom of a helicopter. Image courtesy of the Texas Parks and Wildlife Department.

Flying up in a helicopter is by far the most exciting, and most common, way to get an aerial shot. There’s a couple of different ways you can approach getting your shot, but we’ve tried them and have come to the conclusion that if you’re going to go big and fly a helicopter for an hour you might as well go all out.

The best results that we have personally seen come from mounting a large-sensor ARRI camera (with a RAW recorder attached to it) to the bottom of a helicopter and getting your shots that way. You can also rig a camera like the Canon C300 out of the side of a helicopter and get some decent shots that way, but ultimately you may not have enough stabilization to get usable stretches of footage. An ARRI camera is capable of getting wide shots with extremely large angles of view, whereas a C300 or Sony F3 pointed out the side of a helicopter will only let you capture so much. However it’s worth noting that if you shoot with an ARRI camera, you will need to post-produce the raw footage in order to bring the proper colors out; the raw video will have severely muted colors which is purposeful. This gives you greater leeway in post to bring out the color you want.

Inside the helicopter you have the pilot, a camera operator, a monitor, and usually one other person (a producer or director). The camera is controlled from the inside and only by the helicopter company’s camera operator who knows how to specifically operate the camera remotely. Before take-off from the landing pad, you’ll have to work with the local ultra high-security FAA tower in order to get permission to start flying. Even while you’re flying you might still get pinged by the tower in order to convey what it is you’re doing up there exactly. This is where your experienced helicopter pilot does most of his suave, fly-boy talking, or her sweet charm comes into play. Either way–no one on either side of the sky can be too safe so answer all of the FAA tower’s questions.

However, one big factor working against propelling your crew into the heavens of video bliss is pricing. As mentioned, if you’re going to go big you might as well go all out. But you should also plan accordingly. If you rent a helicopter to shoot some aerials, you’d be paying a daily charge for the service and also for the time it takes to rig the camera to the copter, and then de-rigging it. When you’re in the air there is an by-the-hour cost (for fuel, operator labor) so you have to know and convey a lot of details to your crew and the helicopter crew in advance. Some basic questions to consider are:

1) How much footage are you looking to capture? Costs to consider are the specific
helicopter being used, the camera itself, the DP operating the camera from inside the helicopter, and landing/take-off fees. Spending an hour and a half in the air could be very expensive, so knowing how much footage you ultimately need is crucial. However, all pricing is subject to the provider local to any given area.

2) Do you know where you’d like to shoot specifically? If you have specific locations and know the shots you want, you reduce the amount of time in the air. If you wanted to just “scout” the area and see what looks nice, you would spend more time in the air which means higher cost.

So, the helicopter route may not be the most cost effective route for most productions. This is why the production deities endowed us video folk with access to drones. You would think that getting a drone up in the air with your Canon 5D or Sony AS7 would be easy and a no-nonsense affair, but it’s much more complicated than that. 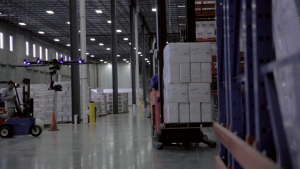 A drone we used during a shoot at a warehouse.

The biggest hurdle to overcome with drone videography is knowing where you can fly one. You can’t fly one over most of America as the Federal Aviation Administration has strict guidelines of where drones can be used, and what they can be used for. Currently only 6 filmmaking companies are technically allowed to fly drones for commercial purposes. However, this doesn’t stop some people from operating them cautiously. Many drone operators will only fly their aerial buddies up to 400ft above the ground, and never out of sight.

A big difference between footage captured by a helicopter and a drone is the camera operator behind each one. Operating a camera through each vehicle/device has its own nuances and requires a specific skill set. A good drone operator can keep the shot steady and if it’s moving, he or she can keep it fluid, too. And never forget that focus, of course, must always be maintained.

The benefits of shooting with a drone include not only being able to capture great aerial shots, but also virtually eliminating the need for a complicated jib and dolly/track setups. Pictured to the left is a drone we used to capture a tracking shot of a forklift inside of a warehouse, and as the forklift raised its contents up, the drone tracked with that movement. So all in one shot, we tracked from left to right and then tracked upward in the span of about five seconds. Using a drone which was set up in less than 20 minutes enabled us to get more dynamic shots in a shorter period of time.

Despite the obvious aerial benefit of flying a drone, many people forget that you can also use a drone to fly very low to the ground. This is where the operator’s piloting skills really come into play because flying too low could damage the camera if it makes impact with the ground or floor beneath. There is also risk present if you fly a drone several hundred feet in the air; if the machine fails for any reason it will fall (not-so-gracefully) to the ground and send your camera to the video graveyard. (Not to be confused with the cutting room floor…)

Here are some other considerations you should keep in mind when thinking about using a drone:

1) How much weight can the drone support? The rule of thumb is: the bigger the drone, the heavier camera it can hold. Drone operators have successfully flown C300s, Canon DSLRs, Sony AS7s, Panasonic GH4s, and Sony F55s. That’s not to say that bigger rigs aren’t available, but usually if the entire set-up is over 50 pounds it’s not recommended to fly.

2) Where are you shooting and for how long? As mentioned, flying a drone in America is hard to swing because of strict FAA regulations. But if you decide to thumb your nose at the law and get some glory shots of the Grand Canyon or somewhere else that’s remote and out of the way, then you should know what shots exactly you’ll need to get and in what areas specifically.

Most of the time, you would hire a drone for a day and that comes with a drone pilot, the drone itself, and the camera operator. Pricing varies depending on the camera you decide to fly with, which dictates how big the whole rig has to be. So when budgeting a drone shoot, your costs include the pilot, the drone, and the camera operator. Some companies include a camera with a drone, other times you would have to supply one so keep that in mind.

Despite all this, when in doubt: give us a call. We’ll take your production to infinity…and beyond! We’ll take it…to the skies! At Atlantic, the sky’s the limit! Our skies are always blue! And clear!

You get the picture (via a Canon C300 mounted on a drone).