At the Atlantic office in New York, we play classic rock pretty much every other day on the speakers. So when the opportunity came up to shoot interviews with Andy Summers, former guitarist of ’70’s and ’80s rock band The Police, as well as legendary audio engineer Geoffrey Emerick, we basically fainted. 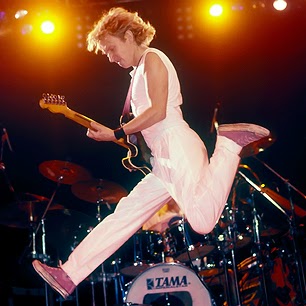 Andy Summers is still this flexible, we swear!

Atlantic provided a trusty Canon C300 with an operator to handle visuals and audio, and a producer to pow-wow with these rock legends. The good news is that neither of them were “too cool for school” for us and really got into the spirit of revisiting the golden age of classic rock and roll. Watch out for them in a UK broadcast documentary coming out later this year!

In the meantime, we’re tying to decipher this message in a bottle we got from a woman named Roxanne. It seems every little thing she does is magic, according to her. But she threatened to get behind my camel, so I’m forced to tell her don’t stand so close to me, because I’ll have to get someone to talk to about Omegaman, because this is a post about The Police, after all.