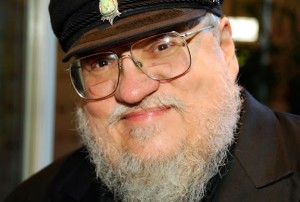 What a jolly fellow!

George R.R. Martin is an interesting fellow. Not only in appearance, but also through his writing, his persona, and his anecdotes. We recently got the chance to shoot an interview with the man, the myth, the legend himself for a “Games of Thrones” highlight reel.

Surprisingly he didn’t primarily focus on the deaths of several main characters who have since come and gone on the show, which makes this man solely responsible for the biblical level of tears shed for any TV show ever.

The interview was shot on a Canon C300, and with a sound recordist recording audio externally in order to produce timecoded MP3s, to be used later for transcription. Fortunately, our crew and gear made it out of the interview alive and not lost to another chapter of Martin’s insanity.

However, this did all go down in Santa Fe, New Mexico. This rings a bell for us at Atlantic…wasn’t there another huge TV show recently that took place in New Mexico? Something about a high school chemistry teacher with cancer and a big ego? Had a mustache, then a goatee? Made some of the purest meth known to man? Ah, no matter–if this writer can’t remember then it mustn’t have been too good a show anyway.

Not like Game of Thrones at least! George R.R. Martin certainly knows how to break bad, in a sense, when it comes to how he tells his stories. You’ll be surprised to find out what are some of his favorite moments, so be on the lookout for that later this year.