Atlantic Gets Real with Denzel Washington on “Reel Life” 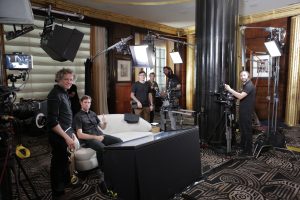 Imagine you could sit down with any celebrity and talk about all the awesome movies they’ve headlined. Who would you pick? Denzel Washington? Of course you would. That’s what Sky Cinema did recently in their newest installment of “Reel Life,” hosted by Alex Zane in New York City. 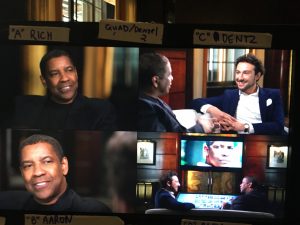 When Denzel’s involved, your production game needs to be upped considerably. When Sky approached Atlantic for some assistance, we realized it’s time to step out of our safe house, that it’s no longer our training day, and that things really needed to take flight. For the shoot, housed within in a posh hotel suite here in our hometown, Atlantic provided a director of photography who established the overall look and feel in partnership with a gaffer and grip team to light our star, four camera operators, a camera assistant, a lead sound engineer and assistant sound recordist, and a plethora of toys to make those images move. 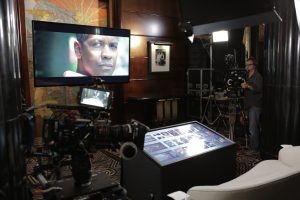 This kind of magic doesn’t come together overnight, though. We took a tip out of the Book of Eli and made sure we scouted the suite in advance and set-up accordingly. By the day of the shoot, we were unstoppable. The episode was shot on four Sony F5 cameras (some on sticks, others on a dana dolly!), and a Sony A7 camera was rigged above Alex’s interactive touchscreen panel that allowed him to navigate Denzel’s entire career in a couple taps of a finger.

By the time the shoot was done, Sky was sure to remember us as the titans of production services. You can check out the series here if you’re a Sky subscriber!