Atlantic & Formula E Take To The Hudson With Audi 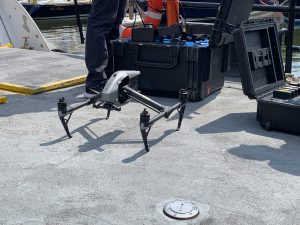 If you ask any production coordinator or producer what was their hardest shoot to put together, you’re in for a good time. A motorbike road trip across Europe? Likely. Skydiving over and landing in the Serengeti? Probably. Filming a Formula E race car driver piloting an eFoil over the Hudson River and capturing it with a 6K drone and a Sony FS7 from two moving boats? Yes.

To assist with capturing this metro-aquatic voyage on video, Formula E enlisted Atlantic as their first mate to make sure things didn’t end up twenty thousand leagues under the Hudson.

Having done this before, we knew the first step was gaining the proper clearance from the Coast Guard for filming on the Hudson River which had a turnaround time of about two weeks. We scouted and sorted the eFoil departure marina, and supplied two boats for the actual filming. One boat was for our two-man drone team–operating an Inspire 2 and shooting in glorious 6K RAW–and Formula E’s director, and the other boat was for our safety diver and an FS7 camera operator, getting behind- the-scenes footage of the action.

The final promo is bookended with shots of Lucas arriving at the marina, then at the racetrack. To accomplish this – we actually shot in reverse; in the morning, our local Director of Photography, camera assistant, and production assistant captured Lucas pulling up in an Audi vehicle at the racetrack in Brooklyn, gearing up, and then “arriving” from the Hudson. Production then re-located to the marina for the Hudson sailing, followed by pick-ups of Lucas getting on the eFoil and riding out onto the water. This footage was captured on an Arri Mini with Cooke S4 primes, operated with a DJI Ronin 2 Gimbal. The DP stabilized himself with a ReadyRig, and Formula E’s director monitored everything wirelessly from afar.

Check out the final promo below, and some more behind the scenes photos in our gallery. Surf’s up! Or should it be…drone’s up?