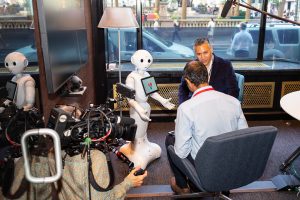 We’re big technology nerds here at Atlantic; after all, working with the most up-to-date equipment is but a prerequisite for what we do every single day. You can easily imagine how we felt when the opportunity to take part in the launch of a banking robot came our way. Yes–a banking robot!

This summer, HSBC became the first bank in the United States to “hire” Pepper, Softbank Robotics’ friendly, informative, and interactive robot. Situated within HSBC’s flagship branch in New York City, Pepper can help customers with an assortment of banking-related inquiries and can even crack jokes, take selfies, and tell you where the closest pizza place is. All you have to do is ask, and Pepper will always be happy to oblige. 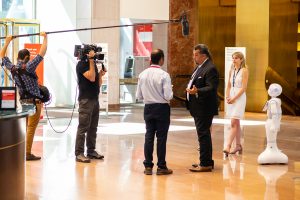 To mark Pepper’s launch, HSBC held a press event at that same flagship branch and Atlantic was there to capture the proceedings. On location with a producer and two ENG camera crews shooting on the Sony FS7, we shot executive opening remarks, press interviews, b-roll footage of the public interacting with Pepper, and one-on-one interactions with Pepper (yes–including selfies!). Atlantic operated seamlessly in the background, allowing HSBC to enjoy their day with the press and celebrate the launch. 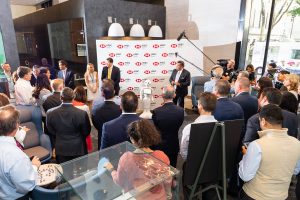 While keeping up with the latest technology is part of our job, being a part of the future is just as important. We continue to remain absolutely thrilled that we got to capture HSBC’s flagship New York location officially become the branch of the future.