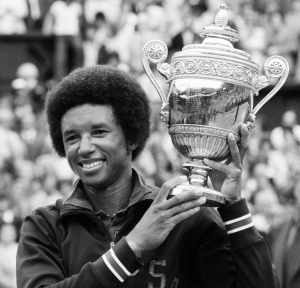 At Atlantic, we never pass up an opportunity to honor the greats. So providing a two-man camera crew for two tennis documentaries produced by the BBC let us contribute a little something in order to ensure the greats are never forgotten.

Just Call Me Martina (BBC One) focuses on the life of Martina Navratilova, one of the greatest Czech and American tennis players who ever played the sport. But speaking of tennis greats, BBC Two also produced the Royal Television Society Award-winning documentary, Arthur Ashe: More Than a Champion.

Each film featured an interview with another legend in her own right, former World No. 1 champion and gender rights advocate Billie Jean King, who is certainly no stranger to us at Atlantic Television, having had the privilege of interviewing her several times. If Billie Jean King says you’re great in a documentary about yourself, then you know you’ve made it.

For her interview portions (which were shot in the offices of the BBC America building here in New York), our camera operator and sound recordist captured King’s legendary insights through the magnificent sensor of the Canon C300 (also arguably one of the greatest cameras ever created, by the way).